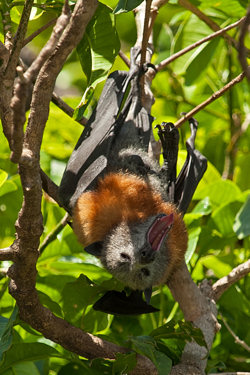 According to organisers, this coordinated campaign on 3 November was very successful with various groups displaying

the Grey Crosses at sites from as far north as Port Douglas in Queensland to Melbourne, Victoria in the south. The thrust of the campaign was to highlight to governments and the broader community that animal cruelty with a particular emphasis on flying foxes is never acceptable. The Grey Crosses were displayed, photographed and, once they had been seen, the crosses were removed.

The campaign was reinvigorated with lethal Damage Mitigation Permits being reintroduced in Queensland for culling of flying foxes to ‘protect’ orchards. The Newman Liberal National Government reintroduced the taking of flying foxes, including listed species, under theEnvironment Protection and Biodiversity Conservation Act 1999 by the use of shotguns even though the Government’s Animal Welfare Advisory Committee advised the practice was inhumane in 2008.  Of course Queensland Government is not alone in this barbaric practice – New South Wales still permits such activities. At least in Queensland the code and guidelines are more rigorous but it is still animal cruelty.

In Brisbane, the focus of the campaign was the fence outside Parliament House and photos on various websites paint the picture. Wildlife Queensland’s Capricorn Branch not only held a display at Yeppoon near Rockhampton but engaged participants at a local well attended music festival.

Wildlife Queensland has been advised that one of the likely outcomes will be a debate on radio between one of our members and a person with opposing or alternative views. Wildlife Queensland takes their hats off to the Capricorn Branch for their ongoing commitment to the flying fox campaign.

Wildlife Queensland commends the coordinators of this Grey Cross event but regrets that such activities are necessary.  Animal cruelty should be a thing of the past not on the increase as it appears in today’s world.