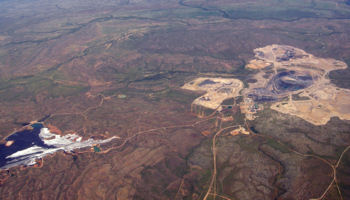 Century base metal mine in Queensland’s north-west
Photo © Geomartin

Paper indicates the intention of the Newman government to reduce people’s rights to express their views on mining projects. Wildlife Queensland maintains that the environment is an issue that concerns everyone, without exception.

Wildlife Queensland recently welcomed the opportunity to make comment on the current Mining Lease Notification and Objection Discussion Paper. The paper proposes three options: 1) do nothing; 2) total deregulation; or 3) an alternative model where processes are streamlined reducing red tape, cutting costs and decreasing the potential for delays. On the surface the latter would seem a reasonable approach – let the people have a say! However, based on the impact of recent submissions on influencing the decision-making processes, Wildlife Queensland has concerns.

Wildlife Queensland appreciates the necessity to achieve a balance among conservation of biodiversity, provision for ecologically sustainable and economically viable industries and satisfaction of community needs. Unfortunately, it is a well-established fact that our biodiversity is in decline (Natural Resource Management Ministerial Council, 2010; Department of Environment and Resource Management, 2011). Many factors contribute to this reality. Wildlife Queensland is of the view that aspects of this current discussion paper will only weaken the environmental protection provisions currently in place. The adoption of this paper in its current format would be a retrograde step for the environment.

Wildlife Queensland is concerned whenever there is a proposal from a government to reduce community participation rights. This current discussion paper is a blatant attempt to restrict the rights of individuals and concerned organisations to express a view on mining projects that put the environment at risk, which all such projects do. This environmental issue concerns us all, without exception, as the impact of any mining venture is not restricted simply to the immediate environs of the operation.

In the case of a government that claims to govern for all Queenslanders, Wildlife Queensland has to question why the public notification of all mining leases and environmental authority applications is proposed to be withdrawn. When the right of the public to object to a mining lease application is withdrawn, only one logical conclusion can be drawn. Further evidence to support that conclusion is provided by the intention to permit the removal of restricted land status for open cut mines. Restricted land status places limitations on the proximity between mining ventures and other development – in other words, it is a ‘buffer zone’. There is strong evidence that the proposed changes favour one sector of the community – the mining industry.

Wildlife Queensland strongly opposes this direction being fostered by the government. In particular we oppose the removal of the right to object to a mining lease application, as well as the intention to restrict notification of mining lease applications to directly affected landholders. Unquestionably this is a reduction in our fundamental democratic rights. Retaining the public call for submissions for the EIS process and review of eligibility criteria and standard conditions may appear to be satisfactory, but unfortunately the EIS process in Queensland leaves much to be desired. The process is basically both a developer’s dream and the environment’s nightmare, whereby approvals are given with time lags of up to two years for environmental management plans to be put in place.

To the best of Wildlife Queensland’s knowledge, the Queensland government is still a signatory to the Intergovernmental Agreement on the Environment and as such, should be guided by the Precautionary Principle. Concern for the environment, and for the health and welfare of communities, must be placed above the sole interests of the mining industry.

Wildlife Queensland is not necessarily opposed to a review of legislation and regulation but such actions should strengthen protection of the environment and the wellbeing of our communities. The current Mining Lease Notification and Objection Discussion Paper fails when considered against the interests of the broader community and certainly those of the environment. The environment has been the subject of endless attacks by the state government and this occurrence only exacerbates the situation.