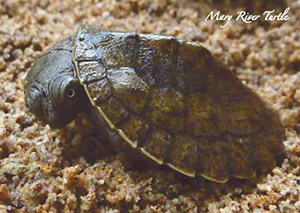 District Landcare Group with a large cheque on 1 November 2014 in a symbolic hand over of the funds raised through the Society’s Mary River Turtle Appeal. Wildlife Queensland Secretary and two other members of Council will join the President at Tiaro Landcare’s ‘Experience the Mary’, a special evening in celebration of the Mary River turtle’s homecoming.

In 2013, Wildlife Queensland knew action was required to do more to enhance the long term survival of particular species of our unique wildlife and so embarked on various species-focussed fund raising appeals. These appeals were underpinned by simple practical strategies that delivered positive outcomes and involved working with likeminded organisations with a proven track record.

The second of such appeals, the Mary River Turtle Appeal, endeavoured to support the successful work the Tiaro & District Landcare Group was undertaking in saving this endangered species. In March 2014 Wildlife Queensland joined the effort to protect Mary River turtle nests and hatchlings from feral animals and trampling by cattle. The approach was endorsed by Dr Col Limpus, a renowned authority on turtles, and action is underway to locate nests and protect sites from these predominant threats.

As a result of the efforts of donors to this appeal, well over 600 hatchlings will have the chance to survive. Funds raised by the appeal have gone to Tiaro & District Landcare Group to assist them in doing what they do best: increase the number of Mary River turtle hatchlings that make it to the water.

Wildlife Queensland’s three species-focussed appeals to date can only be described as successful with more than $100000 raised. The battle to arrest the decline in our biodiversity is not a new one, and it continues. However, if the support Wildlife Queensland is receiving from donors and member activities continues, gains can be achieved, as evidenced by enhanced protection of the platypus by amending the use of opera house fishing traps.

Members and donors, your support is appreciated. It is both valued and valuable. It is proof of one donor’s poignant words, “Little by little a difference can be made”.