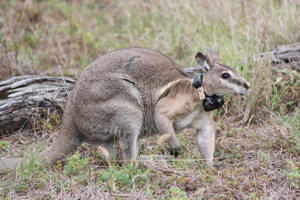 Service, Department of National Parks, Recreation, Sport and Racing to establish the first Friends of Park partnership in Queensland. Taunton National Park (Scientific) is the location of this working relationship with a wildlife focus.

Taunton National Park is the home of the endangered bridled nailtail wallaby (Onychogalea fraenata) and is the only known wild population of this wallaby. Taunton National Park is 150 km west of Rockhampton near Dingo, is about 626 ha in extent and lies in the Northern Brigalow Belt Bioregion. It supports significant examples of endangered Brigalow (Acacia harpophylla) regional ecosystems and of concern Poplar Box (Eucalyptus populnea) open woodlands. These plant communities were once widespread in Queensland but are now found only in isolated pockets.

With no confirmed sightings of the bridled nailtail wallaby since 1937, the species was considered to be extinct until it was rediscovered at Taunton in 1973. Taunton was purchased by the Queensland Government in 1979 and declared a scientific reserve under the then Land Act. In 1984 the adjoining property Red Hill was purchased and added to the Reserve. With the advent of the Nature Conservation Act 1992 the Reserve became Taunton National Park (Scientific).

Wildlife Queensland has for some time been concerned about the bridled nailtail wallaby with reports of fluctuating populations for a range of reasons, including a continuing decline in the quality of the habitat through weeds and the ever-present threat of an extreme fire event. While acknowledging the efforts of the QPWS, the State Council of Wildlife Queensland was of the opinion that more research and enhanced management was required. Discussions occurred with the Upper Dawson Branch based at Taroom and the concept of Friends of Taunton evolved. There was strong support from the staff of QPWS and now with Minister Dickson’s approval, Friends of Taunton is a reality.

It is the intention of Wildlife Queensland through Friends of Taunton to provide volunteers to assist in monitoring the wallabies, to raise funds for ongoing research and to help protect and enhance this park and the wildlife it supports. Wildlife Queensland will be entering into a memorandum of understanding with QPWS, defining a work program and delivering a positive outcome.

This is not Wildlife Queensland’s first interaction with Taunton National Park. In 2010, Wildlife Queensland, as part of its research grants program, awarded Bluey Donaldson from the University of Queensland, funding to assist with her PhD project ‘Effect of vegetation change and management on the ecology and health of the endangered bridled nailtail wallaby (Onychogalea fraenata).’

There are five other national parks (scientific) in Queensland namely Palmgrove, Capricornia Cays, Keppel Bay Islands, Dipperu and Mount Bauple. Friends of Taunton is the initial challenge for Wildlife Queensland but undoubtedly there will be further opportunities to work with the Queensland Government to protect our wildlife and its habitat.