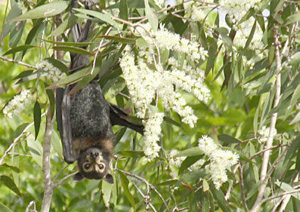 On 7 September 2012 – Threatened Species Day – the new LNP Queensland Government, saw fit to announce amendments to the Nature Conservation (Wildlife Management) regulation 2006 to permit the taking of 4 species of flying fox in accordance with an approved code and operational policy under a lethal Damage Mitigation Permit (DMP). The species include little red, black, grey-headed and spectacled. The latter two are listed under the Commonwealth Environment Protection and Biodiversity Conservation Act 1999.

Up to 10500 flying foxes may be killed annually. It is known that populations are on the decline due to loss and fragmentation of habitat but currently the exact numbers are not known. However a commercial crop grower may be issued with a lethal DMP – previously declared inhumane by the Government Animal Welfare Advisory Committee. The issuance is subject to a number of conditions:

This initiative of the LNP Government is not based on science but an election pre-commitment. In fairness to Minister Andrew Powell, he consulted with key conservation groups, advised what was about to happen and welcomed discussion and submissions within the constraints of the LNP policy. Other key stakeholders were also consulted. Powell listened and the resultant code incorporated some of the input to minimise animal welfare issues, but not eliminate them. Should a roost occur on a growers’ property, shooting at the roost is not permitted. Should numbers allocated on a permit not be taken, those numbers are not returned to the pool for reallocation.

The Land Protection Legislation (Flying Fox Control) Amendment Bill 2012 introduced by Shane Knuth, The Australia Party, is simply outrageous, unjustified, unethical and legally flawed. It is before the Agriculture, Resources and Environment Committee of the Queensland Parliament. It proposes a solution that will not work for a problem that does not exist.

The intention of the Bill is to reduce the risks of people catching infectious diseases from flying foxes but would empower anyone to kill any flying fox by any means. Killing or dispersing flying foxes will not prevent the very occasional unsafe interaction.

Statistics for various causes of death reveal that the approximate average deaths per year for flying foxes between 1990-2009 were 0.05.

To put this into perspective:

People do not catch the Hendra virus directly from flying foxes.

In fact the extreme measures proposed could well increase health risks besides resulting in animal cruelty and further population of two nationally threatened species. This would result in adverse impacts on ecological services as we know them today.

A submission opposing the Bill, compiled by Dr Carol Booth and supported by a coalition of environmental groups, recommended it should be rejected. One of the striking criticisms of this Bill was that it creates the impression that the inappropriate action implemented by the LNP Government is balanced and moderate.

Wildlife Queensland welcomes the fact that Biosecurity Queensland and the Department of the Environment and Heritage Protection are at least endeavouring to gain a better understanding of the public’s knowledge, attitudes and opinion of flying foxes. Wildlife Queensland encourages you to participate in an online survey – so a balanced and accurate view is obtained.

Most of the questions are multi-choice and there is room for comment. It does not take long to complete – mo more than 10 minutes, perhaps a bit longer if you take the opportunity to make comment on particular aspects.

Please complete the survey before 12 October 2012.