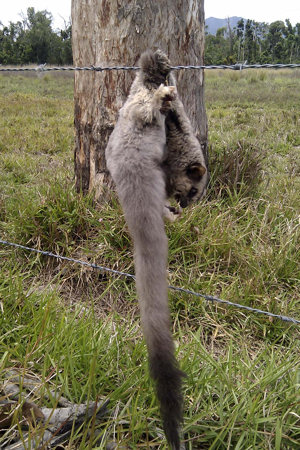 This disturbing image is of a female mahogany glider found

dead today on a barbed wire fence along Ellerbeck Road, Cardwell. The dangers of barbed wire fences to wildlife are well documented. Barbed wire is both an animal welfare and conservation issue. It is recognised as a threatening process in recovery plans for a number of species including the mahogany glider, as stated on the wildlife friendly fencing website.

The glider was attempting to cross the road using a launch tree on the northern verge of the road and attempting a landing on a eucalypt on the fence line of the southern side of the roadway. Barbed wire fences have very low visibility and gliders cannot escape their barbs once they have hooked into their gliding membrane.  It is a slow and terrifying death.

As local Wildlife Queensland member Daryl Dickson said ‘if gliders are using roadside vegetation along this road, then maybe it is time we talked to the landholders again and at least managed to cover the wire adjacent to these very obvious stranding points. Using split poly pipe over the barbs at identified danger point near tree trunks and making the wire more visible are simple ways to assist. ‘

‘There are areas along Ellerbeck Road that are essential for the north south movement of the gliders and we need to be looking at planting some replacement ‘key trees’ ensuring we do not lose the few that remain and maybe looking at crossing poles to assist while the trees are growing, Ms Dickson said. There is an increased danger of such incidents occurring at this time as so much vegetation that in the past, provided connectivity was lost in cyclone Yasi.

‘It also serves as a reminder of how important it is to keep a look out for them – we can save them if only we find them in time.’

If you’d like to know how you can help stop these unnecessary and slow deaths, look up wildlife friendly fencing – an alliance of groups including Wildlife Queensland support this initiative.