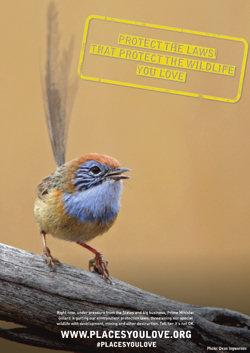 the broader community and was pleased to play a part in the united front presented by non-government environmental and conservation organisations throughout Australia and overseas. This at least deferred the inappropriate action of devolving assessment of impact on matters of national environmental significance to the state.

While Wildlife Queensland accepts the current situation as a partial win, major concerns lurk just around the corner. Should the States and Territories get their act together there is a strong likelihood that this pending disaster has not disappeared.

The following is an extract from the COAG Communique

The Council of Australian Governments (COAG) held its 34th meeting in Canberra today,
20 years to the day since its first meeting in Perth in 1992. The Prime Minister, Premiers,
Chief Ministers and the President of the Australian Local Government Association (ALGA)
participated in today’s meeting.
COAG also reiterated its commitment to focus its attention on policy reforms of national
significance, and to keep its agenda as streamlined as possible…

COAG noted .that the Commonwealth will introduce legislative reforms to progress its
response to the Hawke review of the Environment Protection and Biodiversity Conservation
Act 1999 to further streamline and strengthen environmental regulation.

Jurisdictions have made consistent efforts to improve regulatory arrangements, including
increased use of strategic tools and commitment to early engagement with proponents.
COAG welcomed the release of the Commonwealth’s Statement of Environmental and
Assurance Outcomes and draft Framework of Standards for Accreditation. These two
documents articulate the standards that the Commonwealth has proposed that State and
Territory processes would need to meet to ensure community confidence in accredited
arrangements, and represent an important milestone in COAG’s reform agenda.

COAG committed to continue to work to streamline environmental regulation that delivers
strong environmental outcomes and better conditions for business, with a report on the
outcomes of their further work to be considered at the next COAG meeting. As a further
step to improving processes relating to environmental regulation, COAG agreed that all
jurisdictions will direct their regulatory and referral agencies to eliminate duplication and to
avoid sequential assessments and delayed approval processes and also to utilise common
information requirements for both assessments and approvals.’