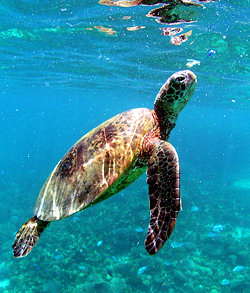 On 14 January 2013, the Commonwealth Government

released the draft management plan for the Coral Sea marine reserve. There is one last opportunity for you to have your say and make a contribution. Submissions close on Valentine’s Day 14 February 2013. Wildlife Queensland offers some guidance on what aspects could be addressed in your submission.

Wildlife Queensland congratulates the coordinators of the campaign and also all those who made a submission and put the effort in. The Commonwealth Government has shown both foresight and strong political courage in steering this initiative to date.

The Coral Sea draft management plan has a net increase of 14km² of no-take protection in the large marine national park zone. The net gain was around the north western end of Osprey Reef near North Horn. Unfortunately the sliver of no take protection along the southwest of Osprey Reef was lost. The much sought after up-zoning of the southern Coral Sea could not be achieved.

From the date of proclamation last November until 1 July 2014, the interim management arrangements apply.

Where to from here?

The public consultation period finishes on 14 February 2013. Naturally the government has to table the plans in Parliament to meet and satisfy due process. On 1July 2014, the Coral Sea marine reserve management plans and zoning scheme commence.

Here are some aspects you may wish to address:

All information you need concerning the addresses for submission is available here.

This campaign clearly demonstrates what can be achieved by planning, sound and science-based arguments and bringing the community along with you. This campaign also had a key element – the political will to achieve an historic outcome.