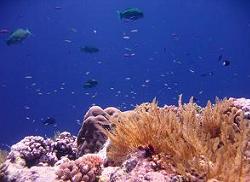 The second public consultation period for the Commonwealth

Marine Reserve Network, including the jewel in the crown, The Coral Sea Marine Reserve, closed on 14th February 2013. Due process now follows. Should everything fall into place the prolonged battle for the Coral Sea will be declared over well prior to July 2013. When finally approved the management plan applies as from 1st July 2014. In the interim existing arrangements continue except for some fishing when compensation is paid. The battle started back in 2007. In 2011 when polls in Queensland revealed massive community support for the protection of the Coral Sea, the campaign gained momentum. Wildlife Queensland was one of many conservation groups that joined the campaign led by Pew Charitable Trusts to add strong support and actively participate in the campaign. However the fact that there was very strong community support helped in achieving the outcome.

There is a possibility that certain actions may delay the process. There are political legislative actions if enacted may disrupt the process but are unlikely to succeed. Wildlife Queensland is aware the Australian Recreational Fishing Foundation is lobbying or endeavouring to have the public consultation period reopened for an extended period. That organisation is seeking an extended period on the grounds that in view of the extent of the Marine Reserve Network there is need for appropriate consultation and the development of a genuine and comprehensive stakeholder process. On the surface this may seem to be a reasonable request. However Wildlife Queensland knows that there has been more than adequate time for consultation and ample opportunities for submissions. Wildlife Queensland is of the opinion that an effort to delay the finalisation of the process prior to the next election is the driving force.

The outcome based on the draft management plan is a very significant gain for the conservation and protection of our marine environment. Could the outcome have been better? Yes!

Wildlife Queensland took the opportunity to raise issues of concern while acknowledging the positives in our most recent submission.

Wildlife Queensland advised of our strong support for the establishment of the Marine Reserve Network and in particular the Coral Sea Marine Reserve.

Wildlife Queensland commended the Commonwealth Government for the increase in the extent of the Marine National Park Zone for the north-western Osprey Reef. However other requested gains for conservation were not approved and there was a slight loss of some protected zones.

Wildlife Queensland has particular concern for the lack of protection afforded to sharks.

The necessity for mid-water trawling in certain zones was queried. Furthermore commercial and recreational fishing needs to demonstrate that such activities are an ecologically sustainable use of the natural resources.

The failure to condition shipping in sensitive environmental areas was raised.

A major concern for Wildlife Queensland was the statement ‘the intention to ban mining and oil and gas exploration’ and not an unequivocal ban. It was requested that this be clarified. Wildlife Queensland has been very generous in praise of the Commonwealth Government based on an understanding that the mining ban was in place.

Comprehensive research and monitoring programs to address knowledge gaps and outcomes are required to ensure the management strategies in use are appropriate. Furthermore the development and implementation of a robust compliance program was advocated to minimise illegal activity.

Finally the draft management plan was silent on the proposed management agency. Wildlife Queensland seized the opportunity to again recommend the Great Barrier Reef Marine Park Authority as being the logical choice an organisation with a well deserved reputation for marine park management. Additional resources would be required.

Although there are several shortcomings in the draft plan that may be addressed now or over time, this is a significant step forward and one of great environmental achievements of the current Commonwealth Government. Wildlife Queensland extends our thanks to all who assisted and helped achieve this outcome.