Community support for the curlews of Coochie – February 2013 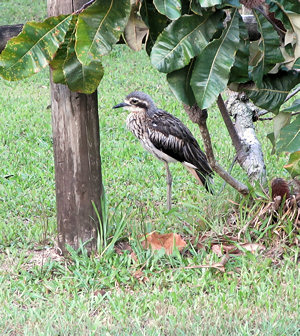 As a wildlife volunteer, you may find yourself exhibiting unusual behaviours – like walking slowly along the streets of

You’re in! One of the bush stone curlews counted on Coochie this February
Photo © Saren Starbridge

Moreton Bay’s Coochiemudlo Island, peering into gardens, staring up driveways and angling to get a good look alongside houses and other buildings. We are here in search of bush stone curlews (Burhinus grallarius) – those long-legged, stately, nocturnal, endemic Australian birds with intense eyes and a spine-chilling wail – and this is the 17th annual Coochie Curlew Count.

Once common in lightly or heavily timbered forests, wetlands, mangroves and salt marshes around much of Australia, the bush stone curlew is losing habitat and considered threatened or vulnerable across the continent’s south. Some areas, such as northern parts of Queensland and the Northern Territory – and Moreton Bay, in south-east Queensland – have been fortunate in retaining healthy populations.

In the early 1990s, Redlands Shire Council’s Wildlife Extension Officer, Adrian Caneris, conducted surveys on the Moreton Bay Islands and recognised the conservation value of these populations. Based on a close association with Wildlife Queensland, he thought the group would be well-placed to help create a community-based community curlew monitoring program, and he was right. Simon Baltais and Wildlife Queensland’s Bayside Branch eagerly embraced the suggestion. Although the first surveys covered several Bay islands, they soon centred on Coochiemudlo, with its accessible network of roads and mosaic of bushland, wetlands and wildlife-friendly gardens.

The association continues, with Redlands Wildlife Extension Officers Jenny Davis and Lisa Bailey joining Wildlife Queensland members and Coochie residents at dusk on a designated evening in February. The island is divided into 12 sections; first choice goes to residents who may have their favourite curlew haunts. The rest of us join the residents or share out the remaining sections and set out with clipboards, pens, torches and binoculars.

Bush stone curlews are so good at standing still, they are easy to overlook, but you quickly get your eye in and they seem to appear everywhere, like stars emerging as the sky darkens. One of the most enjoyable aspects of bush stone curlew, as the Queensland Water Study Group (QWSG) notes, is their tolerance of humans, and it is around houses and gardens, particularly those with or near bushy vegetation, where we see the birds. Some residents who aren’t participating in the count that night still know and love their curlews. In one yard, a bird is sitting and we wonder if it’s a female protecting chicks. A man waves from the verandah and we ask, ‘Any chicks?’ ‘Two,’ he replies, ‘but they have already left the mother.’ A few houses down, we spot five birds – could this be the independent youngsters and a few friends? Bush stone curlews have been seen alone, in pairs, in family groups with up to three chicks and in small flocks.  A woman out for a walk asks if we’ve been down a particular street where she knows there are curlews. We have, and there were.

An hour and a half later, we return to our starting point, chuffed with our list of 28 sightings in our section. The overall count for the night is 187. The first Coochie Curlew Count in 1997 recorded 37 birds. Numbers finally surged above 100 in 2003 and, since 2007, have ranged from 177 to 210. Is this approximately the island’s carrying capacity? We don’t know, but from 2009, QWSG has begun adding to the knowledge base with monthly surveys including tagging, monitoring and building up life histories of the Moreton Bay Islands population. Over a post-count barbecue, David Milton of QWSG shares some data gathered so far: 129 birds banded, 1.4 hatch rate per pair, 1.23 fledging rate. These are unusually high survival statistics. Banded birds have been recorded moving between islands and visiting the mainland. And, surprisingly, fewer nests have been recorded in wet years than in dry years, despite the obvious influence of wet years on abundant food supplies.

Although the birds feature on Coochie and Redlands tourism sites, not every Coochie or Redlands resident looks after curlews. Roaming dogs and cats, pesticides, habitat clearing, nest disturbances and vehicles strikes still threaten Coochie and Bay island populations and curlew-friendly residents still sadly note the occasional unnatural death. However, the annual curlew count and associated research continues to rally community support for and scientific interest in a bird that no one living outside Australia will ever see naturally in their garden.