Bird paradise at risk. Due to be destroyed and replaced by a Parking lot – September 2013

Home » Latest News » Bird paradise at risk. Due to be destroyed and replaced by a Parking lot – September 2013 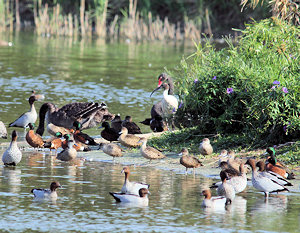 On 3 November, the Queensland state government announced its decision to direct port operators to preserve ‘Swan Lake’ within their amended Land Use Plan.

Wildlife Queensland congratulates all those involved in the successful campaign to stop the destruction of yet another wildlife habitat and commends the Premier and the Environment Minister, Hon Andrew Powell, on their decision.

The lake nicknamed Swan Lake by bird lovers is set to be filled in by the owners of the Port of Brisbane and replaced with a parking lot for new car arrivals waiting to go to dealers.

Over 100 species now call the lake home and at least fifty different species can be seen on a daily basis. It was originally created by the previous publically owned authority to offset the massive loss of environment of Fisherman’s Islands which the port completely enveloped. An award winning café and visitor centre was built on the shore and it was designed for the enjoyment of the Brisbane public and tourists. Now the café and visitor centre are set to be demolished and the lake filled in. Environmental and animal welfare groups have formed an alliance and are determined to stop what they call environmental vandalism. They’re both outraged and saddened.

‘This must not be allowed to happen,’ said Birds Qld’s Greg Nye. ‘I recently saw over one thousand birds there in three hours and that was just the birds on the lake. There are also species that live beside the lake such as the Reed Warblers.’

Even reports commissioned by the Port showed that Black Swans were seen in every survey and sometimes over 200 were sighted.

‘However in a two month survey they said they found no breeding birds,’ said Mr Nye. ‘There was a very good reason for that! It wasn’t the breeding season!’

Wildlife Qld spokesman, Simon Baltais said: ‘What concerns us and I’m sure will concern the Brisbane public is that this whole area was set aside to offset the original damage done to environment. You can’t turn around a few years later and say ‘Sorry we’re taking it back!’ It just makes a mockery of any environmental agreements agreed to by any company, including mining companies.’

“These birds will be forced from their home into areas that are already overpopulated. They may well starve to death,” said RSPCA Qld spokesperson Michael Beatty. “It’s also a shame to lose a potentially world class educational facility.”

Swan Lake Alliance says that there are numerous alternatives available to the Port’s owners and that they’re just going for the cheapest option.

‘We need to be looking into the future,’said Simon Baltais. ‘This area can be a wonderful tourist attraction. The infrastructure is already there. An established bird paradise should not be replaced by concrete to park cars. It doesn’t make sense to us and it won’t make sense to any Queenslander. This simply must not happen!’