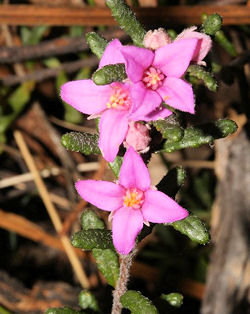 On 21 May 2013 Hon Andrew Powell, Minister for Environment and

Heritage Protection introduced the Nature Conservation (Protected Plants) and Other Legislation Amendment Bill 2013. In accord with due process the Bill was referred to the Agriculture, Resources and Environment Committee (AREC) who in turn has called for public submissions. Public hearings are also scheduled for 7 August and following consideration and deliberation of the information before them, the Committee is due to report by 19 August 2013.

Wildlife Queensland made a submission. The submission remains the property of the AREC until it releases the document.

Wildlife Queensland welcomed the opportunity to make comment and supported the need for the review – or else the plants of Queensland would be afforded no protection.

Wildlife Queensland appreciates the necessity to achieve a balance between conservation and preservation of our biodiversity, the provision for ecologically sustainable industries and meeting community needs. However the current trend to risk-based management and minimising green tape to reduce costs for business and Governments at the expense of the environment and its biodiversity is not supported by Wildlife Queensland.

Adopting a risk-based approach to regulation has its place but for that approach to be effective the data that underpins risk management based decisions must be comprehensive and accurate. While documented knowledge of Queensland’s flora is superior to that of its fauna, major knowledge gaps exist in areas such as Cape York, North Western Queensland and even inland central Queensland the focus of considerable existing and potential industrial development. At least 40 to 60 new species of plants are described each year and distribution patterns are continually being refined. If you are not aware of the flora that is present with a large degree of certainty then a risk-based approach may well be flawed.

Wildlife Queensland is not necessarily opposed to legislative change particularly if it is complex and of a burdensome nature. However such change must not be placing the subject of protection at risk. Minister Powell in his introductory speech on 21 May states ‘Under the act all native plants in Queensland are protected’. Should this Bill be enacted in its current form there is no 100% guarantee that all native plants will be protected.

The existing legislation is far from perfect and has considerable limitations when flora surveys are required for clearing. Reliance on historical records is really not appropriate.

Taxonomic reviews even in common botanical families such as those to which grasses and legumes belong reveal new species. Furthermore more intense floristic surveys locate undescribed species or extend the range of certain plants. In addition to these knowledge changing facts, seasonality, variable weather and extreme events have to be taken into consideration. The conservation status of plants is not necessarily a permanent designation. Some plants considered to be common, when subjected to continuous threatening processes, numbers decrease and the conservation status changes.

Wildlife Queensland is concerned that without floristic surveys, approval to clear and carry out other threatening processes without the need for floristic surveys, will result in threatened plant species being put at risk. Wildlife Queensland strongly supports that threatening processes are effectively managed. The current conservation status of all protected plant species in Queensland must be maintained or enhanced.

Wildlife Queensland is not opposed to the sustainable take, use or trade of protected plants provided such activities are in accordance with all legislative requirements and ‘sustainable’ is adequately and appropriately defined. Furthermore it is agreed that clearing, harvesting, growing and trade of protected species can be managed so that risks to threatened species are minimised. However you need to be aware that such activities are not impacting on threatened species. Also cumulative impacts, not only on threatened species, but on species not currently listed are such that the impacts may diminish the current conservation status of the species.

What is required is the expenditure of funds to undertake comprehensive and statistically sound floristic surveys to reduced the knowledge gaps and enhances confidence levels in the data on hand. Expenditure pain in the short term for long term economic gain is the way forward.

Another difficulty for Wildlife Queensland is that the legislation will enable the chief executive to make assessment guidelines against which any application for clearing, harvesting or growing protected plants cane be assessed. However such guidelines are not available for perusal. Under these circumstances support for the Bill is not possible. Furthermore enabling the chief executive to require a person impacting on a protected plant to pay the relevant compensation would appear to be positive but when followed by the statement in the Explanatory Notes that payment will not generally be required causes concern. The current Government’s attitude to enforcement and compliance in other areas fills Wildlife Queensland with little confidence.

One other aspect that has support is the amendment to ensure Local Government decisions are not inconsistent with the regulations now that the Conservation plan is to be repealed. Also there is support for Clause 18 that amends s173 specifying that the planting and nurturing of or the restoration and rehabilitation of, a protected plant or population of protected plants can be required by enforcement.